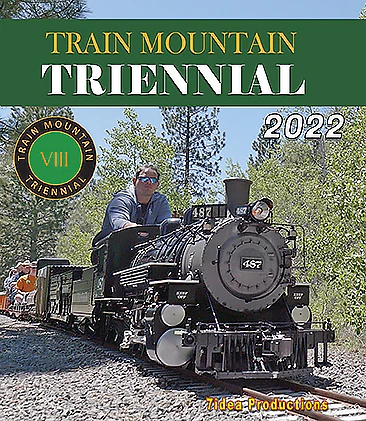 One of the best known events in the Live Steam hobby is the Train Mountain Triennial in Chiloquin, Oregon. After being postponed for one year, the Triennial was back and better than ever in 2022! This was the 8th such meet since the year 2000 so it was officially called Triennial VIII. It ran between June 20th and 26th and was preceded by a work week from June 11th to the 19th.

This program begins by recounting the devastating wildfire and subsequent mud slide that dramatically changed the north end of the 2,200 acre railroad park. Stirring footage and images tell the story of the destruction and massive cleanup effort by hard-working volunteers to get the track back in service.

You will see amazing work trains hauling ballast and pine needles during the Triennial Work Week and meet the “Super Sucker!”

With the Triennial in full swing, hundreds of trains roamed the rails pulled by classic steam, diesel, and electric locomotives. True to tradition, Triennial VIII wrapped up with the Big Toot and Parade of Trains.